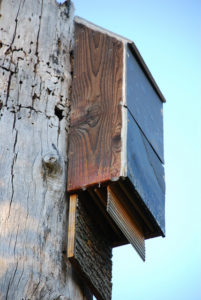 Why do you need a bat house? To shelter bats, of course. Contrary to popular belief, bats are very beneficial and “essential” to our ecosystems. There are over 1,100 different species of bats that consume huge amounts of insects, including mosquitoes. Some bats can consume as much as 1,000 insects in an hour. Certain other bats also pollinate plants, which is another crucial part of our ecosystem cycle. Even bat droppings, also called guano, is used as a natural fertilizer. Guano works every bit as good as cow patties for fertilizer.

Most people look upon bats as carriers of diseases such as rabies. There are very few cases each year of people being bitten by these creatures or contracting rabies from them. You would have a better chance at getting struck by lightning than being bitten by a bat. Unfortunately, because of so many misconceptions, humans tend to kill them which has resulted in many of the species becoming endangered and others threatened with extinction.

To help turn this situation around, many humans have started building bat houses to give shelter and safety to them. In exchange, they enjoy a relatively insect free environment. Building bat houses is fast becoming more and more popular as humans get educated on the benefits of having them around and realizing that they are not as dangerous as some would have us believe. Did you know that bats are actually mammals?

They have their offspring just like humans do. They are also the only mammals that can fly. The flying squirrel really ‘glides’ instead of flying so it is not considered as a flying mammal. Bats also have a fairly long life span of 20-30 years if they can succeed in avoiding human destruction of their habitat. Having a bat house in your back yard offers them a safe place to live. They will eat those annoying mosquitoes and you’ll be able to spend more time outdoors without worrying about getting mosquito bites which, by the way, could lead to diseases such as malaria or typhoid fever.

Please take some time to do a little research about the benefits of bats and why you should build a shelter to contribute to saving the world’s best bug control agents. Don’t let the myths fool you. These friendly, helpful creatures are not dangerous but they are most definitely necessary to our ecosystem. Build a bat house today and help save our furry friends from extinction.

Need step-by-step how to instructions? Jonathan Black, your go to source for bat house plans, breaks it down for you by making it easier than ever to do it yourself.