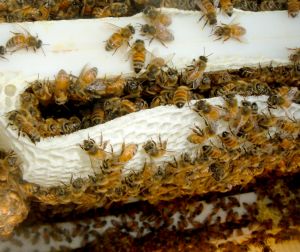 First we had the Killer Bees. They were coming for us, up from Tanzania. They were more likely to swarm, more likely to migrate, and more likely to guard their colonies aggressively. Despite the fact that these killer bees never really arrived in full force or killed anyone, their fearsome reputation lingered on for many years…

That is, until Colony Collapse Disorder. After the bee mania subsided, we realized we’d been foolish. We bought all those pesticides, burned all those hives and called those exterminators out of some bizarre media-propagated paranoia. Now our precious honey and fruit pollination was being threatened as we learned our poor native bees were seemingly disoriented, lost and alienated from their colonies.

If you have bees in your yard, the natural human instinct is to murder every last one of them with RAID. We’re at the top of the food chain. We conquer. We vanquish. We annihilate. We don’t have to make any concessions or negotiate with any bee terrorists. This is AMER-I-CA!

Well, okay, that is one opinion. Here’s another: bees pollinate roughly one sixth of our nation’s flowering plants and 400 agricultural crops. Without them, we could kiss biodiversity goodbye. In fact, cross-pollination helps at least 30 percent of the world’s food crops and 90 percent of our wild plants survive. We’d have lower quantity and quality of food, therefore prices would go up. Our wildflower meadows would not look nearly as spectacular.

So the question remains: how do we live harmoniously with the bees? If you have a beehive in a less-than-desirable place (ie: in your bathroom, on your porch railing, right next to the kids’ swing set), you’ll need to move the hive elsewhere. “And Risk getting stung? Are you crazy?” you ask. It’s not recommended that you commit suicide, but here’s what one blogger did:

Next you can consider backyard beekeeping to give the bees a controlled and targeted place to live that is not in your immediate camp.

Necessary Beekeeper Tools and Accessories for Amateur and Pro