Silkies are the world’s oldest chicken breed, with roots back in 7th Century China where they were used to cure kidney ailments, aging and other ills. “They have hair like a cat, are black, and lay the best of eggs,” wrote Marco Polo wrote of the Silkie in the 13th Century. In 1874, the Silkie came to America, where it became one of the top show chicken breeds and backyard pets. 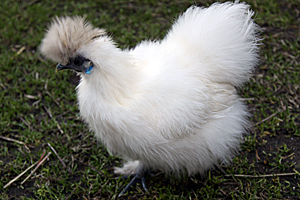 Silkies display the softest plumage in red, white, blue, buff, partridge or black. Unlike other breeds, these chickens lack barbs and quills, so all you see are the softest, fluffiest down feathers. Other unique characteristics of this fancy breed include: five toes (rather than four) and blue or black skin tone (rather than pink). Silkies are fairly small chickens, rarely exceeding 32 ounces for females and 36 ounces for males. This is a far cry from the usual 80 ounces a typical American chicken weighs.

The Silkie temperament is gentle by nature and they are very friendly with their people, often following them around. They don’t mind being picked up by children, which is why they’re found in so many petting zoos. They can also be leash-trained and don’t mind a Sunday drive in the car. Avid Silkie breeders say no two birds have the same personality.

What Is, And How To Candle Chicken Eggs
The benefits of raising dual-purpose chickens
DIY Chicken Feeder
The Pros and Cons Of Ordering Peeps Through The Mail