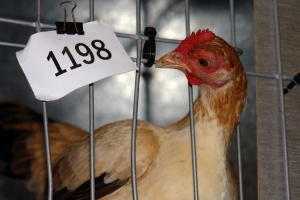 Genetic modifications of animals have received a lot of bad press, not to mention generated pandemonium-level fearfulness from the general public. But what if genetic modification is the key to preventing future epidemics like mad cow disease or bird flu?
That’s precisely what a British research team has discovered. How’d they do it, you ask?

It sounds complicated – and it is – but it’s much more effective than vaccinations, researchers say. Vaccines need to be updated constantly as flu viruses mutate. However, this new process will work every time, no matter the strain. The idea is that genetic modification will create a natural, built-in resistance that is passed down from parent to offspring for many generations.
The rub? Helen Sang, a geneticist at the University of Edinburgh’s Roslin Institute, says that it costs around $79,000 to produce “a small number of stable transgenic birds you can characterize and breed from,” so the process is more expensive. Also, years of testing is needed to convince governments and citizens that there are no hidden hazards of genetic modification. Yet, for places like China where bird flu is a major threat, genetic modification offers a ray of hope for economic and food security.

Ready To Try An Easy Indoor Garden This Winter?
Debate: Should Chickens Be Allowed In The City?
What Will A Dozen Eggs Buy?
Help! My Dog Eats Chicken Poo!