You may or may not have heard about chickens that lay Easter eggs. Yes there are chickens the lay colored eggs. The chicken breeds Araucana (Some times misspelled Auracana), and Ameraucana are know for laying multi-colored eggs. In addition to white and brown eggs they also lay blue, green, teal, and pink eggs. The color’s are bright neon colors but they are a nice pastel color. In addition to Araucana, and Ameraucana chickens there is a third variety of chicken that lays colored eggs that are simply known as Easter Eggers. Easter Egger isn’t an official breed but they were cross bread over the years so they lay colored eggs but don’t have some of the traditional characteristics of Aracana, or Ameraucana. 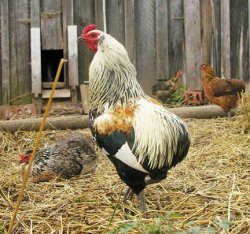 They are also known as “South American Rumpless“. This breed of chicken originated in Chile. The Araucana is often confused with other fowl, especially the Ameraucana and Easter Egger chickens, but has several unusual characteristics which distinguish it. They lay blue eggs, have feather tufts near their ears, and no tail. To comply with the north American standard they must have no tail and are rumpless.

Ameraucana Chickens were bred in America from the Araucana and they have the same gene that lets them lay blue or other colored eggs. The main difference is the presence of tail feathers, and black or slate colored legs.