After a month being in the house inside the brooder box the little chickens were final ready to go out in their new home.I put the chickens in their new hen house Friday night after dark just to be sure that it wouldn’t get to hot for them. I wanted them to spend some time in the coop so they would get used to it and associate it as being their home.

Saturday morning around 10am I  went out and opened the door. It took them quite a while to work up the nerve to come out. This was probably the first time that they had ever been outdoors. After about an hour they came out and spent their first day pecking around and underneath their coop. 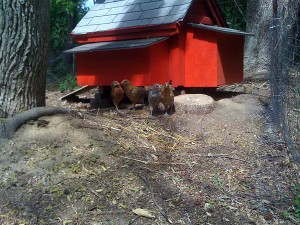 Later that afternoon I went out to visit them. I brought their feeder with me (I had already put the water out the night before) and started calling them. They immediately poked their heads out from under the coop and stared at me. After a minute or two they worked up the nerve and came over.

Once the first chicken realized that I had their feeder with me they all ran over and started chowing down on their chicken feed. I didn’t put the feeder out initially because I wanted them to start looking for food in their natural surroundings. I want them to start eating the bugs and plants that are in their coop. 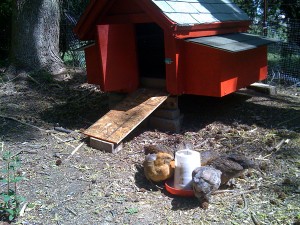 Before I left I placed their feeder in front of their coop next to their water. The first day that they were out they ate a lot of their chicken feed, however their second and third day they ate less of it as they realized there were plenty of other things for them to eat.

How to Feed Chickens for Optimum Egg Laying Productivity
How To Sex Chicks
Thinking About Being A Backyard Farmer? Try Renting A Chicken.
There's A Reason The Chickens Won't Sleep In The Coop